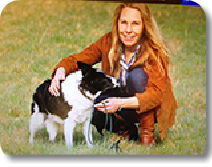 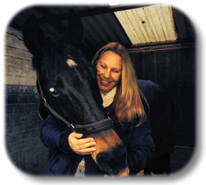 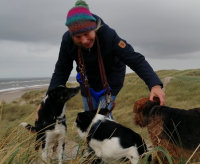 I've always had at least one dog by my side since I was a child.

In 1990 my family moved from Unterhaching near Munich to Schleswig-Holstein. the land between the seas, or to put it another way - horizons.

In addition to work and family, a CAE-unsuspected Bioland dairy goat herd was set up. Between the milking times, our herd also ran on grassland in spring and late autumn. During this time she was driven past other houses on the street every day. This only worked if all family members helped. The roses in the neighbour's garden were really delicious!

Our Airedale male was a great dog but couldn't help us with the cattle. On the Norla in Rendsburg, I saw border collies working for the first time in the 90s.

The dogs fascinated me and I asked if they could also be used on a dairy goat herd. No, this breed would not be suitable for that, was the answer. The idea stayed in my head and for my birthday I was given a book about Border Collies "to wean off". So it went on without a working dog. In the meantime I had the first EU-recognized small dairy in the Segeberg / Schleswig-Holstein district. Since goats and sheep complemented each other, the first gray heather sheep were added. It was always exciting and a full day event when the herd / s had to be moved from one area to the other.

Again, not enough helpers could be available on these days ... Then in 2002 on the trip on vacation I met someone who wanted to hand over a Picard bitch. This should be placed in loving hands with work. I inquired about the breed on this holiday and we took Neira with us on our way back from Switzerland to Germany.

I contacted a woman by telephone who referred me to my future husband. He not only trained border collies, but also dogs of other herding dog breeds. I looked forward to the first training session with excitement. Neira showed talent and I hoped to be able to use her at home.

Unfortunately, that didn't work without the help dog. I called the trainer and he "loaned" me a trained Border Collie bitch, which I then bought from him. From now on everything got a lot easier. A woman, a dog - it worked!

In 2003 I bought a Border Collie puppy there, and I took another bitch with me to raise. I also bought these later.

I trained both bitches myself. I helped other people train their dogs and trained dogs to work on sheep. Here I got to know the most diverse systems of different dogs. And also appreciate my dogs.

This was followed by significant experiences in my life, including an accident with a severe impression fracture in my left knee. I had to give up dairy goat farming because I was no longer allowed to carry heavily. A rethink was necessary. I kept my herdbook sheep herd as an organic farm as a sideline. This was followed by a late course of study, a department head for over 11 years in an international fashion company.

Luna, one of the bitches I acquired in 2003, became seriously ill.

I contacted the breeder at the time. We got closer and a very nice, instructive but also bitter friendship and marriage followed.

During this time I looked after the birth of 2 litters of Border Collies, I helped with the rearing and socialization of 30 puppies.

My bitch Cathlyn comes from one of these litters.

Together with a dear friend we keep and breed 2 breeds of sheep, the gray horned heather sheep and Gotland pels sheep.

I process most of the wool from the Gotland-sheep myself, as far as time allows.

At the beginning of 2020 I was very lucky to be able to buy "Paula" - Forever Mind with surprise and fun - from her breeder Sabine Struck.

Paula is the bitch with whom a litter is planned in 2021.